Digital Output | How to control State of a LED?

Introductory Course on Arduino Arduino Basics Digital Output | How to control State of a LED?

In the previous topic, you learned about Arduino sketch and its flow. In this topic, we will learn about digital output and how to control a LED using Arduino IDE.

Some concepts to keep in mind 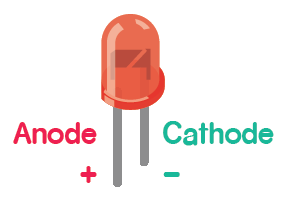 Configuring a Digital Pin as an Output Pin

In order to declare a digital pin as an output in evive that pin should be configured as OUTPUT using pinMode function available on Arduino IDE. This can be done using the following statement:

where the pin is the digital pin number you want to initialize as output.

Alert: As mentioned earlier when the digital pin is used as output it is in low-impedance mode. Hence if any input is given to that pin in-spite of the fact that it is declared as output then due to low impedance there are possibilities that current higher than the capacity of evive may flow through that digital pin and may damage that pin forever.

Using digitalWrite() function in Arduino IDE, you can write a digital pin, to a HIGH or LOW value.

If the pin has been configured as an OUTPUT with pinMode(), its voltage will be set to the corresponding value: 5V for HIGH, 0V for LOW.

In this Arduino IDE sketch, we will turn ON the LED for 1 second, then turn it OFF for another 1 seconds and repeat, i.e. make it blink, same as the example code we run in the previous lesson.

Below is the sketch: