Basic Components of a Robot: Part 1

Now that you’re all ‘geared’ up (pun intended), let’s have a look at those things, without whom your mobile robot can’t exist – a.k.a .the components.

Before we begin our quest, let’s wait for a moment and think; can we find any similarity between the robots and us, just like in the world of science fiction?  Much to our surprise, even though they are not human, they are somewhat human-like. Confused?  It actually isn’t that confusing. Robots are human-like in the sense that they also have a body, just like us. And that body, also has different parts, like the legs, arms, hands, and brain. Let’s have a detailed look. 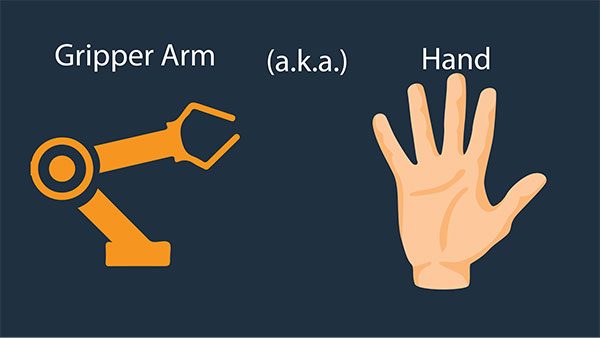 Imagine that you were created without hands. How would you then hold the console of your favorite play station, or eat from that delicious looking jar full of Nutella? You won’t be able to, right? You need hands to do these things, many others. So do our robots; just that they are not hands, and they won’t be eating directly out of the Nutella jar (pour e-souls!). What they have to do work and help us in ours are known as end effectors.

There different types of end effectors for different purposes. The most common type is a gripper. A gripper allows the robot to hold objects, carry them, and then release them. Grippers come in many sizes and styles so that the correct ones can be used according to the work to be done. 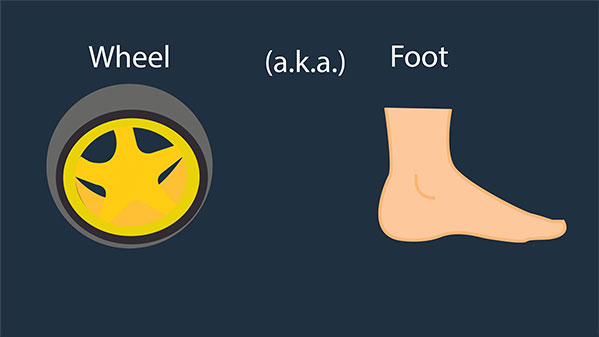 You need feet to go from shop to shop to buy your favorite shirt at the right bargain, or to simply stroll. Without them, it would be difficult for you to do so. Similarly, robots also need something that will help in moving around; definitely not for street shopping, but labs, and military bases, maybe?

Mobile robots move with the help of wheels (generally, but not necessarily). These wheels are attached to the DC motors (actuators) that turn them, thus helping the robot go places. 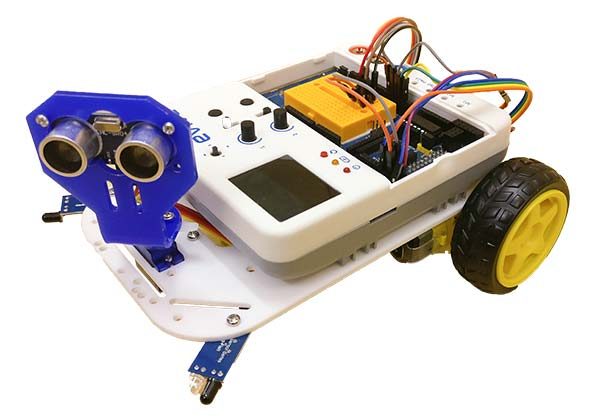 Now, before you rush to that sale at your favorite supermarket with your feet, there is something that needs attention. Here goes:

For a moving object to be stable, you need at least 3 contact points with the surface on which it is moving. For e.g. in a car, you have four wheels, but in a bicycle, there are only two wheels. A cyclist can control the bicycle only when he is cycling, but if he stops he can’t balance the cycle without resting one of his feet on the ground. In our mobile robot, we will have 2 wheels and one caster wheel touching the ground. A caster wheel has a small round sphere, which rolls freely on the ground. It is passive and can move in any direction. 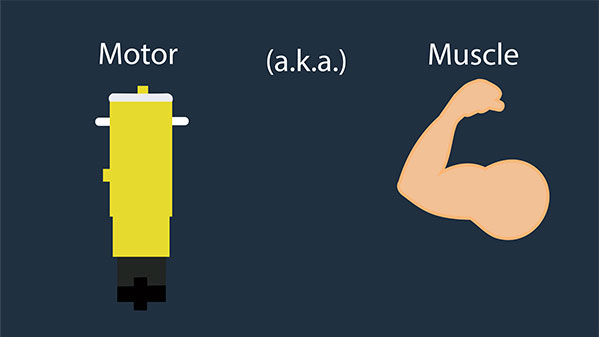 A robot also has muscles. They are known as actuators. The actuator helps the brain of the robot to respond to the surrounding environment. It helps the robot to move its hands (grippers), and its feet (wheels and the castor).

The robots that you will be making consist of DC (direct current) motors and servo motors as electrical actuators. And since you gotta use’em, you gotta learn about’em.

A DC motor, as you might have learned in the course on the basics of electronics, converts electricity (electrical energy) into motion (mechanical energy). It has two essential components:

When the coil of the motor is connected to a DC (direct current) source, a source which generates current that moves in one direction, it generates a magnetic field around the coil that applies a force on it that rotates the coil which, in turn, rotates the shaft (rod) on which the rotor is mounted. The commutator ensures that the current in the two sides of the coil is always in the same direction which makes the coil rotate continuously. The permanent magnets are very close to the coil and help in exerting a greater force on the coil.

In the robots you’ll be making, the DC motor will help in rotating the wheels of the robot. 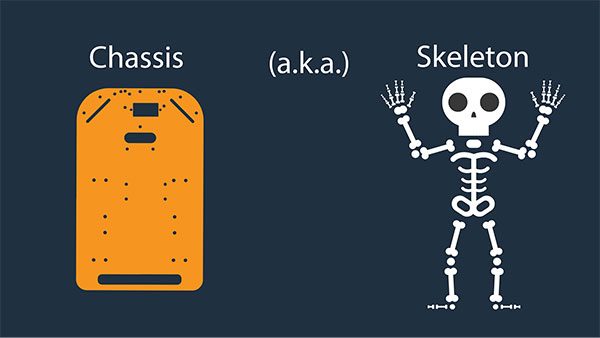 What is a body without a skeleton? Nothing but a soft sac, without the rigidity, and the shape that defines it. Here, the only difference between the robot and us is that it is not exactly a spongy sac; it is a hard sac, with a lot of dismantled parts. So, to look less like a sac, and more like a well-defined body, a skeleton is a must.

Our skeleton has bones, a robot’s skeleton is a robot chassis or simply a chassis – it is a frame (in our case a base plate) onto which everything – the actuators, the effectors, the wheels, the castor, the grippers, the brain – is attached and supported.