The relation between Voltage and Current

What we’ve been doing till now is looking into the different terms related to a circuit separately. It’s time that we find out whether there exists a relation between them or not. After all, they seem to be related, don’t they?

Now, we very well know how much an electronic circuit resembles a water pump system. So does the relationship between the different parameters. Hence, similar to the flow of water, in an electronic circuit, the current increases with an increase in voltage, and decreases as the voltage decreases. This is the Ohm’s Law: one of the most basic, yet important laws in physics. It states that: 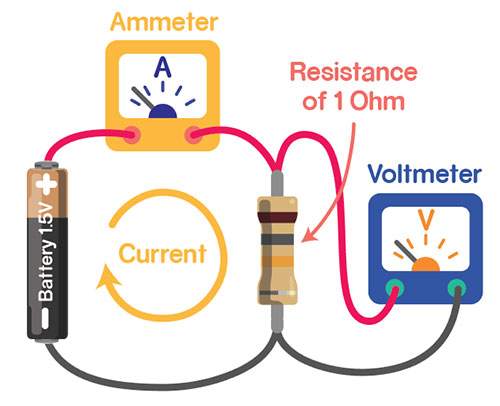 The current flowing through a conductor is directly proportional to the voltage across it provided its resistance remains constant.

Mathematically, the Ohm’s law can be written as:

How to use Ohm’s Law

If we know any two of the three quantities, we can easily find out the third.

Let’s take the example that we took white talking about the unit of resistance. Suppose you have a simple circuit with a battery of 9V and a resistor. The current in the circuit is 3A. According to Ohm’s law,

In order to practically observe the working of the law, we will perform an activity. But before that, there one more thing that we must look into. We’ll quickly go through it and then continue with our activity!