Analog Output through PWM | How to control brightness of a LED?

Introductory Course on Arduino Arduino Basics Analog Output through PWM | How to control brightness of a LED?

PWM or Pulse Width Modulation is a technique for getting an analog output using digital signals.

A digital signal, in general, can have either of the two values: HIGH/ON or LOW/OFF. If we switch the signal between these two values at an extremely fast rate, say, 500 times in 1 second, the signal at the output will appear to be continuous; it will seem as if it is an analog signal.

The duration of on-time, i.e. the time during which the signal is HIGH is called the pulse width. To get varying analog values, you can modulate, i.e. change that pulse width. If you repeat this on-off pattern fast enough, the result is a steady voltage between 0 and 5V.

For example, if you need to have these types of analog voltage output, then these will be the graphs of output signal:

evive and Arduino generate analog output in PWM form. Pin 13 is internally connected to the pin 13 LED which a PWM Pin.

Generally, Arduino’s PWM frequency is about 500Hz. In Arduino IDE, we use PWM concept through analogWrite() function. We give a value ranging on a scale of 0 – 255, such that analogWrite(255) requests a 100% duty cycle (always ON), and analogWrite(127) is a 50% duty cycle (ON for one half the time).

You will require a few extra components for this activity which are:

Circuit for the LED – Arduino 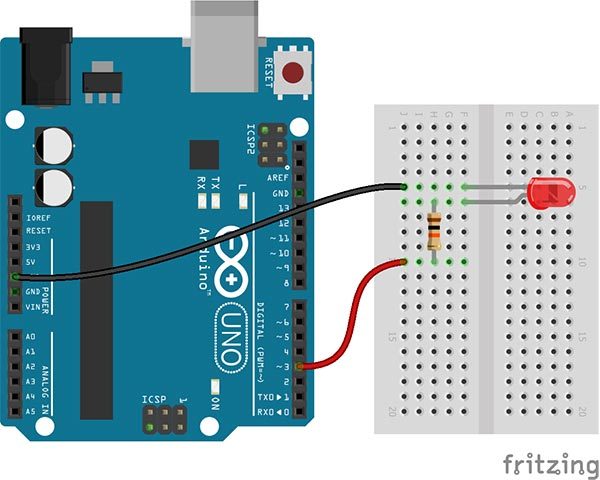 Circuit for the LED – evive 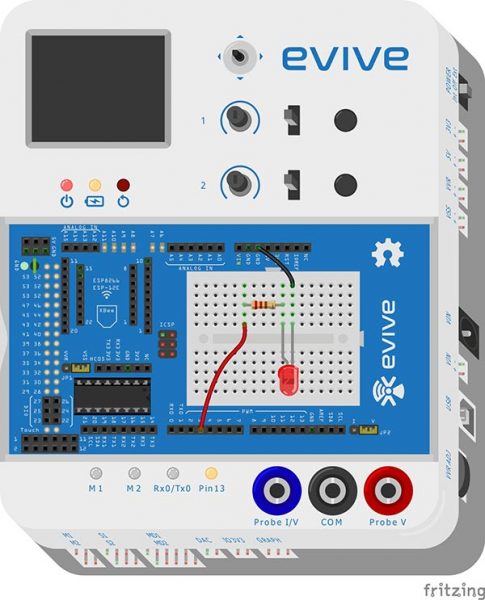 What we will do now?

In this example, we will control the brightness of the LED. First, the LED will get brighter until it reaches the maximum brightness and then it will get dimmer until it is OFF. We will repeat this process.  If we control the voltage supply to the LED, we can control the current flowing through it, and as a result its brightness.

Below is the Arduino sketch: