Let’s try a different appetizer now. Let’s try making a square. Here, other than the pen down and move () steps blocks we’ll also use:

As much as you like keeping your stuff around you, visible to you all the time, it would be better if you cleared the stage before beginning anything new (sounds familiar? Like, *ahem* something mum always says on seeing *ahem* the state of your room?). For this, go to the Pen palette and drag and drop the erase all block anywhere in the scripting area and click on it.

At the end of step 2, you’ll have a nice square drawn. But, it was quite a task! You had to click four times to make the square. What if there was a different way, which required a lesser number of clicks? Maybe just one?

Great news! There exists a method, using which you can draw a square and you’ll need to click it only ONCE. This method is called writing a script. A script is a series of blocks attached one below the other that make a program together (and not the dialogues of a movie). You need to click on the script once and all the blocks will be executed in the order they are placed. Let’s begin writing the script.

Now when you click on the modified script, you’ll be able to see the pencil moving and drawing side of the square on by one.

The script you wrote contains the same blocks repeated again and again; it takes up unnecessary space in the scripting area. What if there was something that eliminated this problem and saved the space?

You’re one of those lucky kids with whom we’re sharing the secret magic ingredient that’ll help us in making the script short and saving the space in the scripting area. Come in *drum roll* the repeat block. 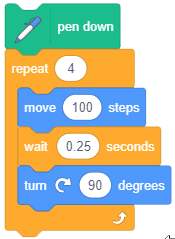 Miracle! Just one click, no repetition of blocks, no extra space, and the pencil draw the square flawlessly!

Save Yourself The Hassle

You’ve mastered the different ways of drawing a square (give yourself a pat on the back for that!). however, one teeny tiny bit remains. Every time you want to run the script, you must click on it. How about removing this bit, and introducing another block, that would save you the hassle?

Introducing the when () key pressed block. It is a hat block, present in the Event palette. A hat block, in general, is for starting a script. Unlike other blocks, you can only place a block below it. Let’s use this block to start our script. 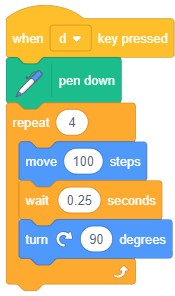 Now, the script will run, and the pencil will draw a square whenever you press the d key on the keyboard. Don’t forget to click on the erase all block! 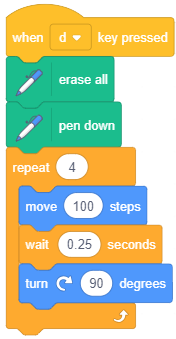