Before we directly dive deep into voltage and its source, let’s reconsider our water circuit for a moment; we saw that in our system, the pump is the power source and the pressure that it applies to force the water around is the voltage. Therefore, voltage is nothing but a type of pressure difference that a power source creates at its two ends. This difference makes the charge flow around the circuit.

There exist many power sources, but the most common, and the one that can be found perhaps in every house is a battery. Since we’re talking about batteries, it’s time to bring in a new concept: polarity. Polarity is the property of having two poles that have opposite physical properties; as far as electronics is concerned, there are two poles: positive (+) and negative (-). A battery also has a polarity; it simply means that one end is the positive pole, and the other is the negative pole.

The positive pole or the positive terminal is said to have a higher voltage as compared to the negative terminal. But, what makes polarity so important that we’re giving it a good amount of our attention? It is important because it decides the direction in which the charge in the circuit will flow. If the polarity is reversed,i.e. the positive becomes negative and the negative becomes positive, the direction of flow of charges is also reversed. In certain devices, the charges don’t move at all if the polarity is reversed. You must have noticed that in a remote when you place the battery in the opposite direction, the remote doesn’t work.

All of this said, let’s perform a short and sweet activity.

Activity 1.1: The Case of the Missing Polarity

Before beginning this activity, please ask your parents or an elder in your home to give you an AA battery covered with a paper.

Let’s become Sherlock Holmes for a few minutes and solve the case of the missing polarity. Ms. AA Battery had an accident and has unfortunately lost her memory. She doesn’t know anything her polarity anymore, i.e. which end is the negative pole and which end is positive. We must help her recall her polarity. The only clue that we have is that she always does her hair in the same unique way: make a bun on top of her head. How you find out which end is positive and which is negative?

No, we’re not done yet with voltage! First, we saw what voltage is; then we had a look at the concept of polarity and performed an activity to find out the polarity of a regular AA battery. Now, we’re going to put the battery to a test and see how much voltage can it generate. For that, we’re going to use a very special and magical device proudly known as evive: the body, mind, and soul of this activity, and many more to come. It has a lot of features that can help you perform a wide variety of activities. But for now, let’s focus on the function that will help you in this one. Take evive out form the starter kit and hold it in your hand; on its top, in the bottom right corner, you’ll see three relatively big holes; one each of blue, black, and red colour.

These are the probes that are used to sense external quantities such as voltage and current. we’ll be using the red and the black ones to measure the voltage of the battery. Among the different components in the kit, you’ll also find 2 channels: one red and one black. We’ll use these channels for our activity. 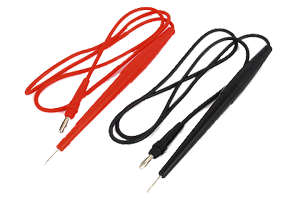 As soon as you touch the battery terminals with the probe, you’ll see 1.5 written below Probe V; and that, my friends is the voltage of a regular AA battery that you use at your home.