It’s time look at the third term that enters the picture whenever we talk about electronic circuits: Resistance.

For that, let’s consider our dear old water pump system yet again. When we press the pipe, we don’t allow the flow of water; Similarly, in an electronic circuit, wires tend to resist the current as it flows through them. This property of resisting the flow is known as resistance. This opposition can be increased or decreased by changing the thickness of the wire. More the thickness, less the resistance, and vice-versa. 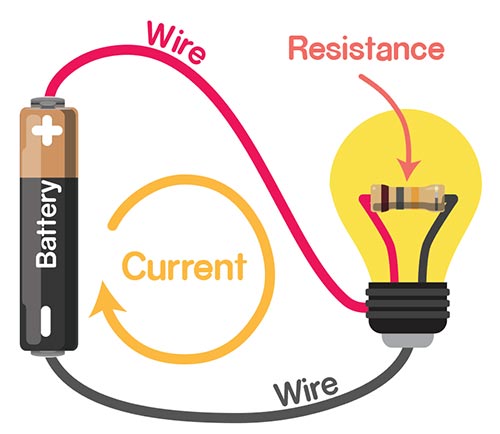 But, since the wires are made of conducting material, their resistance is negligible. Therefore, we need an external resistance to control the current flowing inside the wire. We can introduce this resistance by connecting external physical objects in the circuit. They are known as resistors. The resistance introduced in the circuit by the resistor is not negligible. The external resistor is a necessary evil because it helps in protecting the circuit from a heavy current that may damage the circuit.

Before we finish off this topic, there is one more thing that you should know. While talking about current we discussed conductors and how they readily allow current to pass through them. Doesn’t that make you wonder if there is something that completely opposes the flow? Turns out, there actually is! Certain objects don’t allow the current to pass at all, or at least not as readily as the conductors. They are called insulators. Insulators have a very high resistance. That is why they don’t allow the current to pass. Some of the examples are rubber, paper, and wood.