Ohm’s Law in the Real World

It’s time to the put the Ohm’s law under observation and have a look at its practical application. To do so, we’ll be making a circuit in which we’ll light up an LED, and make sure at the same time that it doesn’t blow up. For that, we are going to need the evive starter kit. Inside the kit, you will find all the equipment necessary for this observation. You’ll need:

Before we begin anything let’s have a look at evive and the platform where we’ll be performing our activity. To see how the platform looks, you’ll have to first open the magic lid. Once you open it, you’ll see a small board with many holes neatly placed in rows. This board is known as a breadboard. 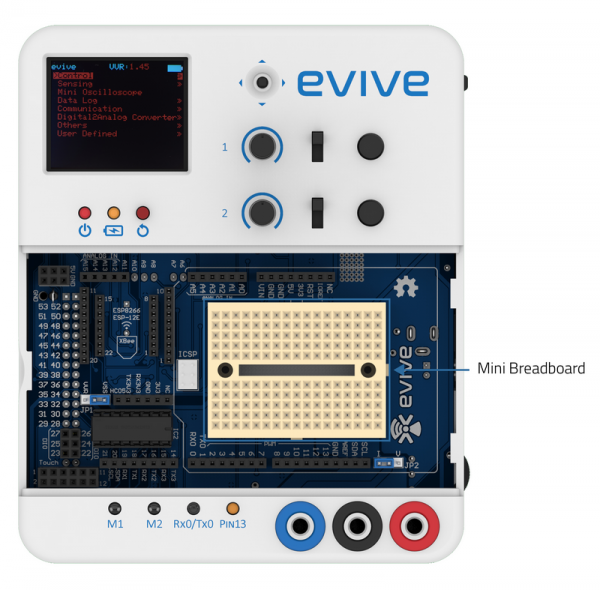 From where it got its name is another story for another time. Breadboards are something that is absolutely necessary when learning how to build circuits, or when making a project or a testing a circuit for the first time. Why are they the best place to start? Because the circuits we make using them don’t require soldering, i.e. joining two or more wires by melting and then using what is called a filler metal to secure the joint. Soldering makes a connection permanent. Breadboards, on the other hand, have horizontal strips of metal, which is a conductor. Each strip has clips that are below the plastic holes. These clips allow you to insert a wire or the leg of any component. All the components inserted in the clips of ONE metal strip will be connected to each other because the same current will flow in that strip.

Now, let’s have a quick look at evive. It has a sufficient number of power output ports, one of them being the 5V port, on the right side. You’ll see 5V written above the port with ‘+’ and ‘-‘ sign written below the voltage marketing. This port will act as the battery/power supply for our circuit.

Now, let’s get to the actual business; making the circuit: 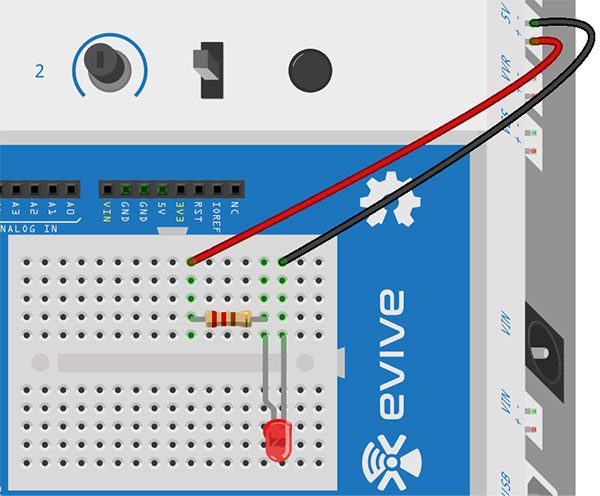 Till now, we saw the HOW of the circuit; now, it’s time to have a look at the WHY.

Depending on the colour, an LED requires a voltage in the range of 1.5V to 4V. But the battery provides constant 5V; nothing more, nothing less. This means that the current will higher than what the LED can take. This may blow the LED up. This is where the resistor comes to our rescue. The resistor will limit the value of the current flowing through the circuit. Since the resistor and the LED will be connected in series, i.e. one end of the resistor will be connected to the power source and the other to one end of the LED, the same current will flow through the resistor and the LED. We need to find out the minimum value of the resistance that we need to keep the current below 0.02A. 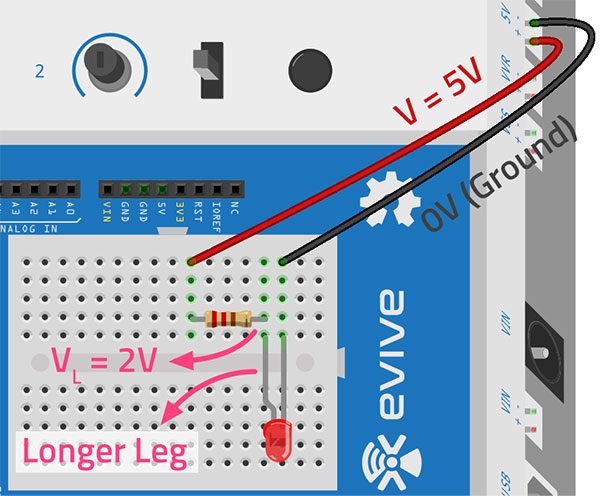 Now, if we connect the resistor in series with the LED, there will be a voltage drop across the resistor. This means that there will be a difference of voltage at the two ends of the resistor, i.e. if at one there is 5V, then at the other end the voltage will be less than 5V. And this voltage at the other end would be available for the LED. Let’s assume that our LED requires 2V; this means that the voltage drop across the resistor should be 3V. We also know that the current passing through an LED should not be more than 0.02A. Using Ohm’s law, we can calculate the resistance as follows:

Therefore, we need to connect a resistor of at least 150Ω. Any value greater than this will keep the LED safe. If you look through the starter kit, you’ll find a bunch of resistors which having a resistance equal to 220Ω. This is the reason why we used a resistor of 220Ω.